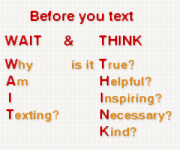 So it’s true.  Texting makes you shallow.  Or at least that’s what a University of Winnipeg study causing a lot of buzz has found.  Frequent texters – especially those in their teens – are more likely to place higher value on wealth and image than on moral, aesthetic or spiritual values.  Worse, texters who send more than 100 messages a day are likely to be more racist and less ethical.  The researchers surveyed 2,300 psychology undergraduate students every year for 3 years to determine whether certain types of “brief” social media like texting and Twitter encourages rapid, relatively shallow thought.  Disturbingly, the researchers found that the students’ level of self-reflectiveness declined over the study period.

Although I haven’t read the research paper itself, something very obvious struck me about this research that was not reported in the media.  Ever heard of the phrase, “Correlation does not equal causation”?  The lead author of the paper referred to this when he stated, “There could be a hundred different reasons why these associations [i.e. the associations between texting and being shallow] exist.”  Perhaps the students were already shallow to begin with, driving them to reach out to others to try to become more ethical, moralistic and self-reflective.  Or perhaps their personality types were attracted to texting and tweeting and not the other way around.  Having worked in the media in a past life, I am well aware of deadlines, headlines and the temptation of making a story sound more “sexy” than it really is.  LOL

How to find me